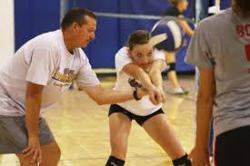 The Art of Coaching

I believe that the most common mistake coaches make is coming to practice unprepared. I can’t count how often I’ve heard a coach ask his/her athletes, “What do you think we need to work on today?” If you’re attempting to erode your team’s confidence in your coaching this is a great way to start. Of course I do encourage coaches to ask their athletes what they believe they need to improve on. Doing so allows athletes to buy into the training by having identified themselves those skills/team situations they need to improve in. However, this should be asked of them at the competition following a match/event. Walking into a practice unprepared is never a good idea.

Essentially, there are three parts to any practice. These are: the warm-up, skill development and team tactics/team play.

The warm-up: When considering your team’s warm-up there are a few things to consider. For one thing, shin splints are a major problem in our sport. It is generally understood that running with poor quality shoes is a major cause of shin splints. That being said, high impact warm-ups are the major cause of shin splints in our sport. That is, making athletes run, jog, or perform man-makers all contribute to this growing problem. By the way, volleyball shoes are not running shoes, so I can’t understand why so many coaches who believe that shoes cause shin splints continue to pursue high impact warm-ups. A good reference book on this subject is written by Steven D. Stark, "The Stark Reality of Stretching."

Here are some other suggestions:

If your team practices three times a week why not have one day when your warm-up is a game. Warm-up games that I use include hand-soccer, basketball-volleyball, 2 on 2 or 3 on 3 queens-court games (short-court or half-court). On other days, warm-ups may consist of high contact exercises like passing, volleying, and hitting against the wall. This is referred to as an “Active Warm-up.” Other active warm-ups include passing in pairs, generally referred to as “partner passing”. This can start with one athlete tossing to the other then moving up to juggling between the two.

Skill development: Visit any skill page on this web site for more information on skill development. Remember, however, that there is nothing here about how to teach athletes how to move on the court. Movement is not a recognized skill in the sport yet players spend far more time moving then they actually do making contact with the ball. To learn how to properly teach athletes the fundamentals of movement I suggest you work with a more experienced coach. This is one area that you simply can’t learn from a book or web site.

Team tactics/team play: This is another area where I find my coaching style differs from most coaches I know. Many coaches spend a great deal of time playing “Kajima” with their teams (positional defense with the coach hitting off of position 2 and the setter back-setting to him/her), or playing any number of “Wash Drills.” I tend to do very little of both. I should mention that my teams also rarely scrimmage. I prefer to run “Offense vs. Defense Drills” to practice positional defense and “Side-out Wave Drills” to train our side-out offense. Rarely do I combine the two. That being said, it is important that every new coach approach coaching with the intent of developing his/her own coaching style. I don’t believe that any approach is in itself better than another; it’s the coach’s ability to apply those drills to the needs of his/her athletes that makes the difference. You all have your own personality and finding drills that allow you to develop your own coaching style is a better approach than trying to replicate the coaching style of a coach you admire.

The Reality of Coaching.

I have coached my share of recreational community centre teams and elite club volleyball teams. Needless to say, the expectations of parents and athletes depends greatly on the program their son or daughter has registered in. If you are coaching in an environment that has a “fair play” philosophy or for a club team that has expectations of medaling at Provincials or Nationals you must understand that your coaching philosophy must be influenced by the environment you are coaching in. And be sure to have a detailed parents meeting early in the season to discuss your coaching philosophy. Not doing so often leads to misunderstandings with athletes and their parents.

Regardless of whether you are coaching a very skilled club team or a less-skilled school team or community centre team you must be prepared for the fact that most teams have athletes with varying levels of skill, athletic ability and attitude (both positive and negative).

Remember that, unlike school teachers that are locked in private classrooms, coaches are in a fish bowl with all their actions being scrutinized by parents. You need to accept that and not give it much thought. Whatever happens, as long as you stick to your coaching philosophy, as stated at your parents’ meeting early in the season, things should stay on track. I know that if I have 12 girls on my 16 & under club team I have twelve girls that hope I know what I am doing and 24 parents that would be happy to tell me what to do. Sitting in the stands game after game over the past 2-3 years has made them all experts in how to develop elite teams. So don’t forget, coaching is simply not viewed as a profession by the general public, and although any parent accountant, lawyer or office manager would be offended at being told by you how to do their job, they will all have strong opinions on how you should do yours.

They also believe in involving the team in making some team decisions; a team playing smart and making good decisions. They want their players to become independent, able to play and make good decisions without them.

The initiation period. When boys make a team they generally accept immediately that they are part of that team. Therefore, if you are coaching a boys' team you should consider letting them know early how you will train the team and their roles on the team as you see it at that time. They want to know what you will do to win and a sense of their role within the scheme of things. Girls do not generally respond this way. When they have made a team they require a socialization period where they get to know each other. Only when they feel that they are accepted by the team (and that they, in turn, also like the girls that they will be playing with) will they feel like they are truly a part of the team. It is therefore important if you are coaching a girl’s team that you spend some time with affirmation circles or team outings to give the girls an opportunity to get to know each other.

Differences in their view of the coach. Boys are far more likely to approach their new coaches with some degree of distrust. Simply stated, they are more reluctant to give their trust to new coaches. Once that trust has been earned, however, it is very hard to break. Unlike males, females tend to readily give their trust to their new coach. However, once that trust has been broken, it is permanently so.

Coaches should remember that females on a team must have a personal connection to the coach, and it has to be unique for each player. Pulling athletes aside to ask them how they are doing in school, or to discuss other interests they have is a good idea. But remember to be sincere.

While male athletes enjoy being singled out for positive achievements (Star of the Game, Tournament or Practice), this practice often makes females uncomfortable and should be monitored. While negatively singling out athletes in front of their team is generally understood by male athletes as a quick way to air out problem areas this should be avoided in female teams. Whenever possible, pull the athlete aside and speak to her privately. She will be embarrassed by the experience and her trust in you will be damaged. Also note that females are very sensitive to the tone of your message and not only the content. This is rarely an issue with boys.

Training considerations include the following: Women’s teams need additional incentives beyond winning. Challenge them to help their teammates. Pair more experienced athletes with less-experienced ones. Perform “pit drills” in which all-out effort in the drill is the goal and not winning. Females do not generally like competing directly against their teammates. It is hard for them to be competitive against each other in one-on-one drills. Explain the focus of such drills so that they understand that your objective may be, for example, how your team defends against the middle attack if you are isolating middle attackers. Knowing that the point of the drill is not to beat one’s teammate helps in such situations.

Some final notes include: Males do not need to like all their teammates to function as a team. Females require more group support; they want to be liked by their teammates. Good team chemistry is critical to the success of women’s teams. Females have a hard time saying publicly, "I am the best," while males thrive on saying it. Men are hierarchical (top to bottom), while women rely on a network (web) and connectedness. In women’s organizations everyone is connected to the leader; they tend to be more decentralized. The leaders are more likely to bring the group together.

Female coaches - you must show your players that you care about them as people over and above their capabilities. Female athletes tend to be more forgiving of their male coaches; so remember...."Nobody cares about how much you know until they know how much you care."