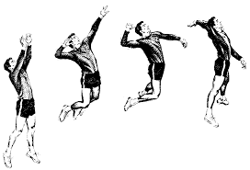 The availability of proper equipment will greatly impact the quality of your training. Having carts with plenty of balls allows coaches to break the attackers into “Half and Half” sides with half the athletes hitting while the other half shags. This allows for better tempo and quality of reps. The availability of tennis balls has also gone a long way in helping our training the transition game of our athletes.

Three-step Approach: Most coaches in the province teach a three-step; that is, right foot forward followed by a left, right-left approach for right-handed athletes. Naturally, the final two steps are a quick right-left, two-foot take-off. The arms are slightly forward with the initial left foot and swing back on take-off. Many coaches teach this approach for both outside and inside attackers. For the transition game I prefer what I call a short three step (others call a two-step) for both my middles and left-side hitters; that is, the left foot is forward and they perform a left, right-left from this starting position.

Timing vs. Spacing: The fact is that spacing is much more difficult for younger athletes to learn than timing. I often hear coaches yell out to their athletes, “It’s your timing!” when athletes are early with their approach. In other words they have arrived at the ball and must now wait for it to fall on top of their hitting shoulder. Sometimes they find that they have overrun the ball and our hitting a ball that is now behind their hitting shoulder. The reality of the sport is that their timing is quickly set, so if they are early with the approach simply have them pull back a few feet and they should improve on their timing. That is actually their spacing.

Transition vs. Side-out Footwork: Increasingly I hear of coaches instructing their athletes to pull back and approach with four steps. Even middle attackers are now being asked to do this in some cases. Although I believe that this is a good idea in a side-out situation (when athletes have more time to get away from the net), in my opinion, athletes should be trained on shorter footwork patterns for a quick transition game.

Arm Swing: I’ve often heard coaches describe hitting a ball as similar to a “baseball throw.” Although leading with the elbow is the same whether throwing a ball or attempting to hit one, a volleyball spike must be hit with a high point of contact, unlike throwing a baseball which has a low release point. The follow through is also different in that a baseball throw should finish with the throwing arm across the mid-section while a standard volleyball attack would have the follow-through along the side of the attacker’s hip.

Tips: Attackers should let their setters know what type of sets they prefer. These types of discussions should occur freely between hitters and their setters. Attackers shouldn’t be restricted to one generic approach. Hitters must learn to adjust to the ball and the various situations they will face.

IMPORTANT: The following are hitting drills and the focus must remain on the hitters. Whenever live blockers are used they should reward the attacker when he/she has executed the technique correctly. Blockers should not be exerting themselves aggressively attempting to block the ball. That is not helpful to your hitters.