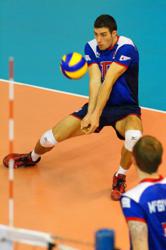 This drill preferably requires 12 players, but can be done with less. Six on one side in serve receive positions and two blockers in each of the three blocking zones on the other side. The coach tosses a ball to the serve receive side who plays out the ball, with so many blockers chances are the ball will be blocked, making sure that the defensive players cover their hitters well. If the blocked ball is picked up, lay it out. If the ball is blocked, the coach who is now standing behind the blocker who made the block, immediately tosses over another ball to be covered as though it has been Blocked. Do this 2-5 times in a row. Repeat a few times and switch front to back and make sure to mix players who have just been blocking.

OFF THE NET SAVES:

Have two groups on either side of the net. Have a line of defenders to save the ball off the net, a setter, and a hitter outside. The coach throws a ball into the net and the defender tries to bump the ball to the setter who sets the ball outside (just catch the ball). A point is awarded if the set ball is actually hittable. This is a difficult drill, but develops an important fundamental tool. Play a game to between 5 and 10.

Both teams get set up in defensive positions. The coach stands at right front like the setter (the setter is still in the drill, but just not setting). The coach tosses a ball to any of the hitters, making the toss either a perfect set or a bad one, forcing the hitters to adjust just like in a game. The rally is played out. Switch sides every 5 tosses or so.

Set up both teams in defensive position. The coach tosses a ball in to either side to begin. The middle blocker is not allowed to block or hit, they are only to cover tips. The outside hitters must tip at least 1 of every 3 sets. When covering their hitters, all defensive players should take an extra step in. Alternate the side the ball is tossed in and play a rally score game to between 5 and 10 points.

Set both teams up in defensive positions. This drill is to help blockers and diggers, so there are no quick sets allowed. Only 4s (high outside), 2s (high middle), and 5s (high rightside) are to be set. This enables the defense to get in their correct positions each time. The coaches delivers a free or downball to begin the drill.

The purpose of the Deuce Drill is to help the sideout team maintain focus and not give up several points in a row. A lapse of focus can result in a run of four or five points which can drastically affect the outcome of a game.

This drill is somewhat confusing, so be clear that each team is assigned as either 'offense' or 'defense.' You may not want to set a winning score until you can see how the drill is coming along, and can get a feel for the rate of scoring.

The court is divided up in half and the back line for this game is the 10 foot line. So the game is played within the ten-foot line on only one half of the court. The whole team partners off and 2 players are on one side and 2 are on the other. Using only an underhand serve, one team serves to the other and play begins. Once a team wins a side out, the losers must leave the court and the new challengers come on to face the winning team. Challengers serve. This game is fast paced and a fun way to get everybody involved. The team will love it because it is fun and competitive.

Set both teams up in defensive positions. The coach tosses a ball to a player in the front row at the ten foot line, who must stay on the ground to hit it over (downball), or to a back row player who must pass the ball over (freeball). Once the coach tosses the ball the drill is on. Rotate front to back every 5 tosses. Switch sides after two rotations. A scoring system can be used if desired.

Set up both sides of the court in defensive positions. A coach tosses the ball anywhere on or off the court simulating the first contact or dig. A player runs after the ball and tries to bump or hand set the ball to another player to hit it over. Play out the rally. The team who wins the rally gets the next ball. Play to 5 and then rotate.

One server, one passer, a setter, two blockers and two hitters are needed. On the coaches cue, the server puts the ball in play and serves to the lone passer who must pass it to the setter. Meanwhile, both blockers stand in the middle of the court and anticipate where the setter will set it. Once they see where the ball is going, the blockers must react and get into position to block. The hitter goes into the attack and the goal is to get it by the block. Award points to whichever team scores. First team to 10 wins and then switch. Note: if your blockers are not skilled enough to move across the net to block, then start them lining up exactly even with the hitters. This will even the sides chances somewhat.